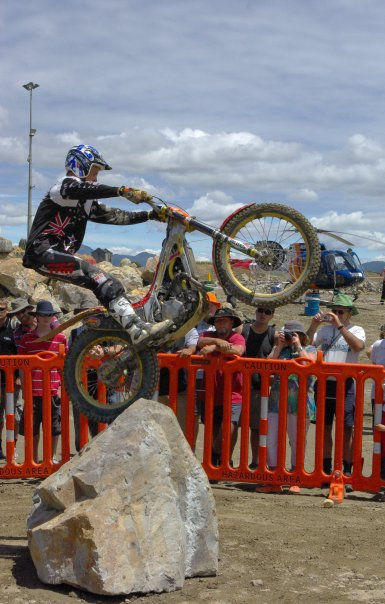 Karl Clark and Blake Fox hit the ferry on Thursday 14th January 2010 and were kindly picked up by Jake Whitaker where we all headed north to Waihi.  While Karl, Jake and Warren were all in Waihi it was taken advantaged of and a training day was held on the Saturday 16th January.  There is good depth in with Moto Trials in the North Island right from Youth through to Expert.  Training went really well and Karl was happy to be able to put something back into the sport.  Late afternoon we headed to the Gold Mine demo areas to do the final set up which was to be held on the 17th January.  The Waihi Gold Mine is only metres from the centre of town, you can walk right to the edge of Waihi's huge open pit gold mine. The Pit Rim Walkway leads from the town centre to viewing platforms, which offer stunning views of both the pit and the surrounding countryside.

The Mine has a history that spans three centuries. John McCombie and Robert Lee first discovered gold on Pukewa (Martha Hill) in 1878. Martha Mine quickly became one of the most important gold mines in the world. By 1952, when the mighty Martha Mine closed, 174,160kg of gold and 1,193,180kg of silver had been extracted.

The deepest vertical shaft plunged 600m from the surface. Radiating from the seven vertical shafts, a 175km long network of tunnels was opened on 15 horizontal levels. About 600 men usually worked the mine but in 1909, when gold production peaked, 1500 people worked between the mine and its stamper battery at Waikino.

Following the resurgence of the gold mining industry in New Zealand in the late 1970s the new Martha project was the first major hard rock mining operation to be commissioned. Opening in 1987, the open pit was extended in 1997 and an underground operation on the outskirts of town also began operation in 2006. 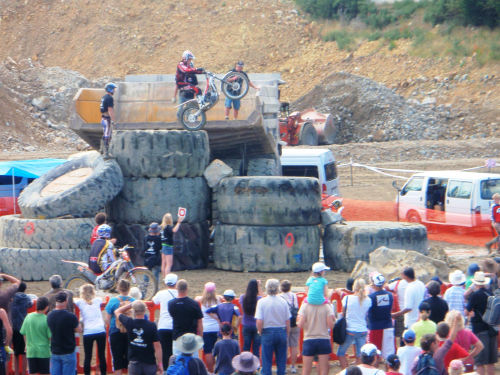 Every second year they have an open day to the public which is very well received.  Previous years they have up to 10,000 people though so this set up was surely going to expose the sport of Moto Trials.

Sunday morning we all woke to light rain and we then knew it was going to make the obstacles slippery.  The fine dust in the Gold Mine turned to thick mud but that didn’t stop us from getting the job done.  Within the first half an hour they had received 1000 people through the gate, so we then started our demo at 10:00am and went without stopping till the last demo at 4pm.  We had junior riders like Gabby Gundry first then Blake Fox riding in A Grade, followed by Sharmair Shing doing hand stands while balancing on his bike which was a real crowd pleaser then followed buy push bike display riders with the top Expert riders Karl, Jake and Warren which completed the one and a half hour circuit.  We went on four times which took us through till 4pm.  The first demo was extremely wet and felt like Scottish terrain but the spectators still enjoyed the show.  From then on the clouds cleared and the sun came out which was great because we could then attempt bigger stuff like riding into the nine metre high dump truck which was really spectacular for the crowds.

Big thanks go to the Gold Mine for allowing us to promote our sport and the effort they went to for setting up.  Also like to thank Jim Henderson for organising everything and Gary Sampson for putting us all up at his house.  And also Jake and Pat Whitaker for taking us up to Waihi.

All in all a great weekend and was really impressed with all the riding abilities.

Look forward to the next one 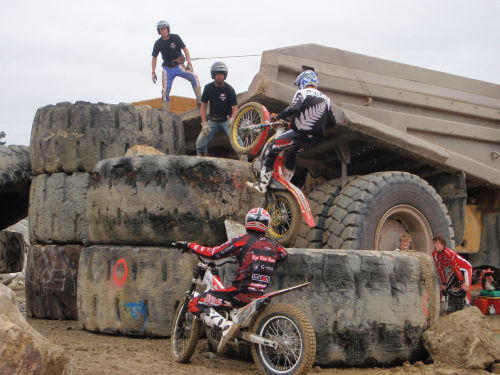