As most of you know I was lucky enough to be chosen to compete in the Oceania Champs 2010 which was held in Glenmaggie, Australia.

The Glenmaggie  Easter trial has been running for 35 years. It is very similar to our Kaikoura 3 day trial in that it is a social atmosphere and usually an event that people go to catch up with everyone and enjoy the ride. This year however it played host to the Oceania Champs and things were a little bit more official…. they taped the sections all the way round instead of only parts so somebody told me.

This year they received 157 competitors ranging from the very young on “minis” to the veterans. Six of those competitors were very special, they were Kiwi’s.

Five out of the eight members of Team Kiwi arrived on the same flight at Melbourne airport at 10ish in the morning Thursday 1st April. It was the start of what was going to be one epic weekend and you could feel it amongst the five of us. The five of us being: Jim Henderson, Francis Sydenham, Steve Armistead, Gabby Gundry and, ME. We made our way through customs and headed off towards the rental cars where we were hoping to run in our number six member Warren Laugesen. Before we had even got to the entrance he had spotted us.

The Boys sorted out the rental cars and then we were off to find our fancy rentals in the parking lot. Gabby and I claimed the metallic orange/gold V6 wagon and Warren climbed in behind the wheel.

Melbourne is huge. I haven’t really experienced anything bigger than Christchurch so I did a lot of staring from the back seat as we followed the leader car in front that seem to not quite know where to go even with the GPS….. They were trying to find the Sherco place so that Steve could see his bike before we made the journey to our accommodation. After some wrong turns off the freeway (the GPS didn’t pick up the road under the freeway) and down some dead end streets we got to where we needed to go. Steve opted to fit his pegs to his bike whilst we went on the hunt for some food. Sandwiches are a big thing there apparently, not just trendy but literally big. I really could only eat half.

Very soon we had started our three and a half hour drive to Tinamba, were we staying. The freeways are a mission with all the traffic and I was more than happy I wasn’t driving. Somewhere along the way, round about where we went through an underground tunnel we lost sight of our leader vehicle.  When we got onto the clear road Warren started on the catch up part of our trip thinking they had gotten a wee way ahead of us. After a while and some constant speed we realised they weren’t in front of us, in fact there was a huge possibility that they had missed the tunnel back in Melbourne and had to have done another loop to get out. They eventually caught us up…

We got to our accommodation in Tinamba and learnt that our last two members of Team Kiwi were out riding at Glenmaggie so we decided to head down there and check it out; just as we were pulling out the drive in rolled Jake Whitaker and Nick Ball. Team Kiwi was complete. It was also my first meeting with Darryl and Estelle Boorer and their two children Jonty and Kaitlyn aka Team Kaos. Team Kaos were amazing over the weekend, not only did they have a range of bikes for us to ride, they took care of us during the day and in the evenings.

Friday morning we were up pretty early. I was anxious about the bike I was going to ride a 2009 Beta 250. I was unsure how I was going to adapt. None the less I had decided that I had no choice and the only way I was going to be able to be happy with how I rode that weekend was if I did the “bull at a gate” theory and throw anything (within reason) I could at the bike until it felt like my own. Lucky for me that idea worked and I was well used to the bike in less than an hour.

On our way back in Gabby and I were invited to go for a ride with the rest of the girls a little later. And wow! When we turned up there were a lot of girls. Some had opted to do the junior training but a dozen of us headed out in a group… a group of girls… plus Jim and Warren. We met some great people on that ride Michelle Coleman, Kristie McKinnon, Brooke Lonie (their TDN’s team) Adina Reed, Chloe Whittle (who has some amazing photos of the weekend), Ina Hall… just to name a few. And the skill level of all of them. I mean they can ride! That was really a highlight of the weekend for me.

Saturday Morning, Day one of the Oceania Champs. Nervous much? Yes, yes I was. Jake, Warren, Gabby and I were introduced as the NZ Oceania Team at riders brief. We had a plan and that was that Gabby, Warren, and I with the assistance of Jim would ride together. But, 15 sections, 3 laps, 5 hours, that wasn’t going to happen. Warren only had 11 sections he had to ride. My intention was to stick with Gabby and Jim in case I needed some help as I was riding their “B” line (similar to intermediate) for the weekend, that didn’t happen either. I should have done the math earlier 157 riders that’s 10 per section, that’s a lot of down time in a queue. After the first section of the day I cut away from Gabby and Jim thinking it the best way to finish the trial on time. 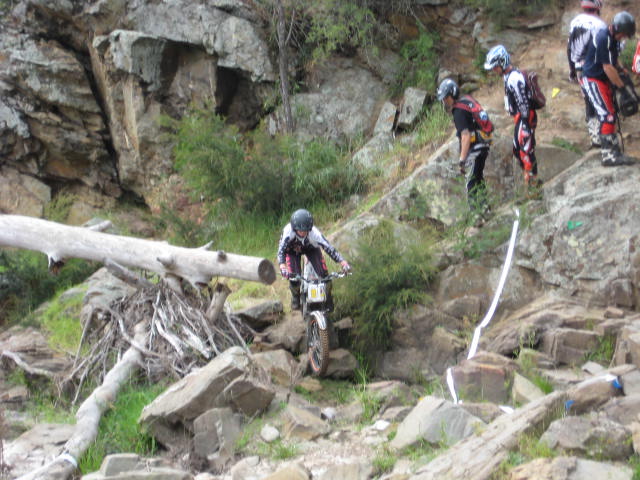 My first round had taken me through till 1.30ish to complete. Normally two hours would be enough to do two rounds but not when you had a queue of 5-10 people at every section. All of Team Kiwi just had to push ourselves hard to get finished under time. They ended up extending the time by half an hour to give people more of chance to get finished.

The sections were challenging. If I were to compare it to anything it would be similar to Stephen Olivers training school area. It had a creek all the way through the property which the sections follow, slightly slippery rock, steep uphills with loose dirt but grip, some nice banks and logs. All in all a lot of fun. I did a couple of very ‘Stef’ things that day. I sank knee deep in mud whilst I was walking a section but then I washed it off when I went for a ‘swim’ later that day. I didn’t drown the bike which the Aussies were amazed at. I explained I had had some practice at that before.

I finished the day on time and on 85 or round about points. That wasn’t enough to beat their Michelle who more than halved my score. Lucky for me the rest of Team Kiwi pulled through and took wins. We were up 7 points to 4.

Sunday, Day 2. We started an hour earlier that day so that everyone had time to get finished. Again Team Kiwi headed off in their own directions with one goal in mind and that was to win the day and bring “the log” back home. The sections were similar to the day before, infact some were just the reverse of the previous days. Nice loose banks, steep uphills, rocks and logs what more was needed? I think I even got a little bit sunburnt.

The day went smooth and I felt I rode well. Unfortunately I could not pull Michelle back in as she put in another good day of riding. I occasionally saw team members during the day and got the idea that they were all having a great day. After our last team member, Gabby, had return to the Koas tent at the end of the day, we had concluded that Team Kiwi was once again taking home the win.

The presentation made it official, we were the Oceania Champs 2010. But we also managed to get some placings with Jake taking out his grade, Warren his grade. Gabby got 3rd in C grade, Francis got 3rd in his and I had the unofficial result of 3rd overall in women’s.

So all in all not a bad effort. It was an epic weekend and something that I would definitely do again!

Just a quick thanks to a few people Dad, Shirley and my family for getting me there. Warren and Jim for all their efforts. Pioneer and everyone who supported me. Team Kaos and Team Kiwi for the experience. 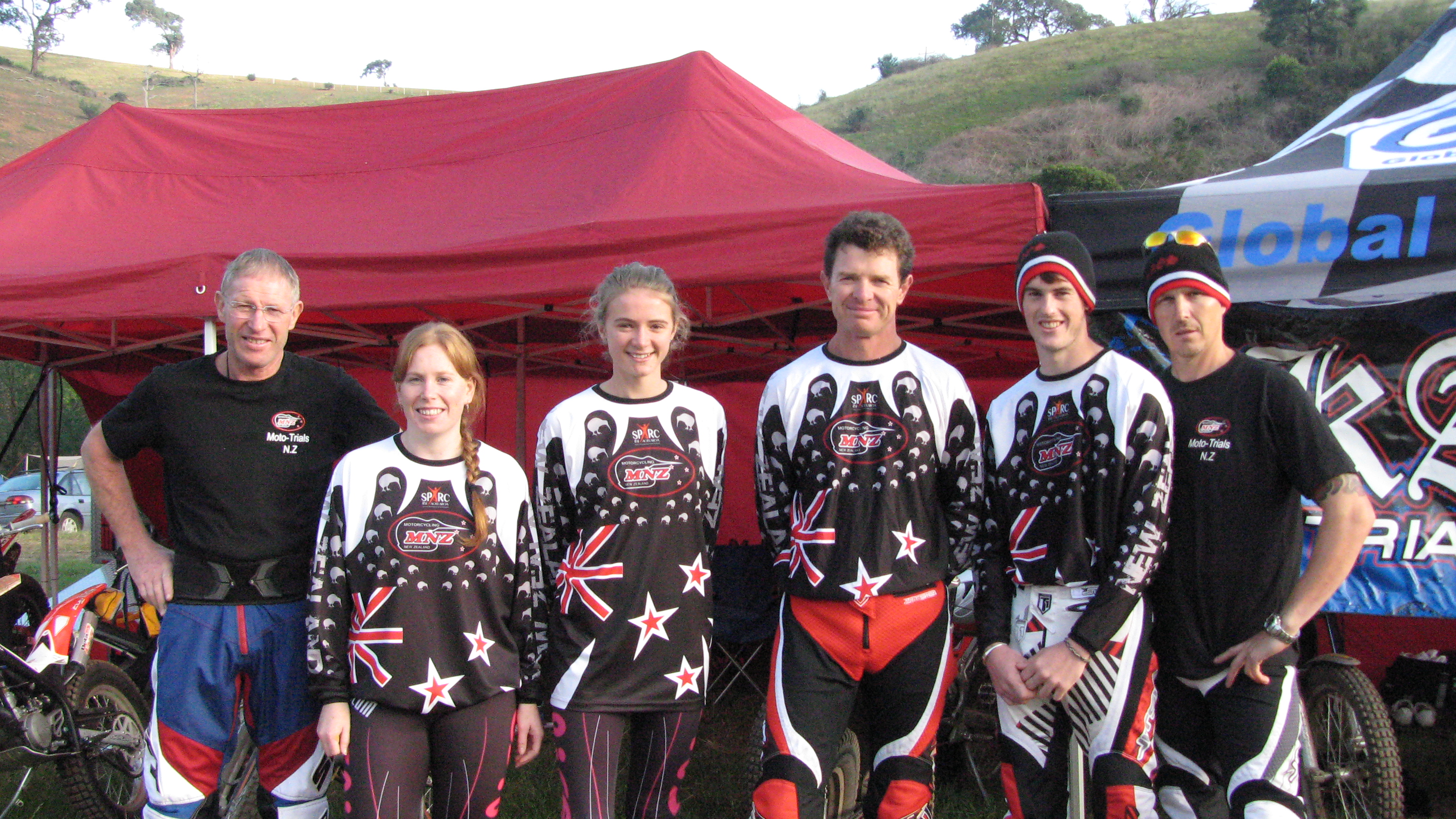 See the photos from Stef on our photo Gallery.

http://picasaweb.google.com.au/TrialsPhotos/Glenmaggie10# this is another link to more photos from a man called Greg Cramond.