Last time I wrote was just before the last indoor Jake was doing, what an excellent ride from Jake to come home with a 3rd place finish. Jake rode strong all night and beat some guys that even ride in the top class in the world. The section’s in the final were massive and if you were to make a mistake the bike and rider could fall 5/6m from some of them. So was a great night and one for us both to remember. Following that we had our last Italy trial which was held at a trials park over here. All 12 sections were held within a football field to try and attract more spectators as there is always something happening with 40 or so riders going at it at once. We walked the sections from 10 till 12 in the morning and the trial did not start till 2:00pm. Once you have walked them you are Not allowed back in the section to look you can only look from the outside the section. Two laps of 12 sections and you have three hours to complete. Jake finished a strong 6th and we had 2mins left of time after our last section. From there we had a weekend off before Scotland so we headed to a good Italy friend’s house (Cobuz) to get in some slippery training to prepare Jake for the last world round. Scotland was only a one day race so we were working out of the Beta truck and not the TTT truck as would have been a lot of cost to send the ttt truck for the one day (3day drive). Jake and I were flying to this one as well as is the cheapest option. We arrived Friday night and Saturday morn was sign in followed by the morning practise with walking the sections after lunch. Same rule in the world rounds the rider is only allowed in the section on the Saturday and on race day has to look from the outside of the section. Three sections were man made and the other 12 were in one of the slipperiest creek I have ever seen. Also time was going to be a factor as to just complete the lap without riding the section’s would take 45mins. Sunday and Jake’s start time was 10:30 with 3 hours to complete 1st lap and 2 hours to complete 2nd lap. Jake started off with a clean on the first two sections and then we hit the queues of riders at the start gate. With slippery sections like this the best way is to keep moving but some time the queues don’t allow you too and when you have 5/6 riders in front of you, the rider has to regroup and is like starting over again. We also had a rider break the wire on a flag and had to sit there and wait for the observers to remove the broken bit of wire and redrill the hole in the rock for the flag to go back (That’s racing) we finished the first lap in seventh place and had 10 points for going over time. We knew we were going to be going for it the second lap as only 2 hours to complete the 12. Jake started out great with some mega world class rides. We were well on time going into the last two sections up the top and only had to make the 10min ride back down the mountain to do the last man made section’s. Coming out of section 12 the spark plug decided to stop working and took us a few minutes to work out what had happened. We made it to the last to section with 4mins to ride them only to find 3 riders in front of us in the queue. it also started to rain but Jake was confident that he could ride them well. Three on 14 and a mega clean on 15 but we went over time by 6mins which ment it was nine points for the last two sections or we could of taken two fives when we arrived back because of the 4min time left which would have been ten points and also for the day result would of put us back a spot. All these things you have to way up in the race as what is best. Jake had an excellent 9th finish and if we would have had a bit of luck and no time points that would of put Jake in 7th for the day. So that was the finish of the world rounds this year for Jake and going into the last two rounds Jake sits in 10th on the world results. Japan two day is next month as well as a two day in France in September. But the cost are too high to travel to the last four rounds and the money will be better spent on Jake for next year as Jake chases is dream of being world no1. With it even looking like there will be a round in Aussie next year for you all to make the trip to give Jake some Kiwi support. Top Trial Team want Jake back next year and have been a really good team with all the support.  Thanks to you all back home that have got in behind Jake, and I know we are all proud of Jake and also for him for putting NZ on the World Trials Map. Let’s hope we can get Jake back next year to go for the no1 spot. 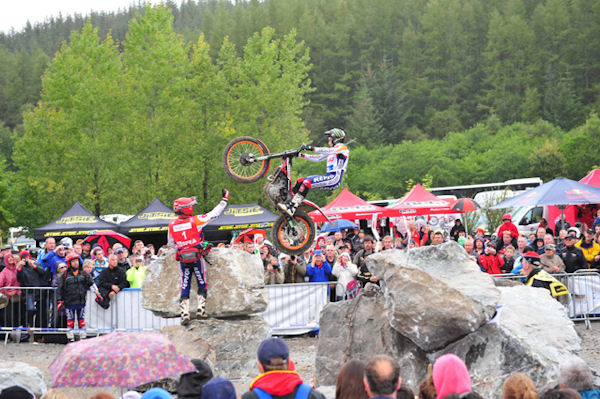