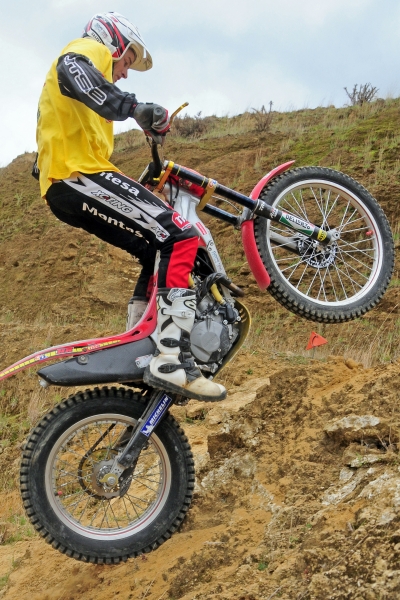 OCTOBER 19, 2010: Wellington’s Jake Whitaker could be forgiven for being a little paranoid … it’s true that everybody is out to get him.

The 2010 Plumbing World New Zealand Moto Trials Championships will be held in and around Christchurch this Labour Weekend and defending experts grade champion Whitaker is the man everyone will want to beat.

There is probably no looking past Whitaker to dominate this coming weekend with his form in recent months nothing short of stunning.

But, while the Kiwi international is clear favourite to win, that won't prevent some very big hitters from taking aim at the talented young man from Wainuiomata.

Foremost among those expected to threaten the 17-year-old Whikater is likely to be Nelson’s Karl Clark.

A top line-up of riders is expected for the three-day event with event director Derek Scott, from Christchurch’s host Pioneer Motorcycle Club, promising the terrain will pose a wicked challenge, even for classy world championship contenders such as Whitaker.

Day one, on Saturday, October 23, is set for Living Springs Camp, Bamfords Road, Governors Bay, on Banks Peninsular. Competition begins at 10am and should wrap up by about 4pm.

Day two on Sunday is at Horsford Downs, Okuku Pass Road, Whiterock, while the third and final day on Monday is scheduled for Graylees Road, on the Akaroa-Christchurch Highway.

“Each day features a very different course and they should really sort the men from the boys,” said Scott.

“It will go from slippery volcanic soil to huge limestone boulders and some big hill climbs. On this sort of terrain the riders will have to get everything exactly right.”

In the A Grade it will be worth watching for Tauranga teenager Jim Lowe-Pattie, while Nelson's Nick Oliver, Taranaki’s Matt Foster, Tauranga’s Phil Shilton, Lower Hutt’s Carl Robson and Ashhurst’s Kevin Pinfold should also feature near the top of the points.

Intermediate grade action is likely to centre on Nelson’s Peter Oliver, who won the A Grade title last year but has dropped down a division this time around. He will have Auckland’s James Snowdon and Rotorua’s John Haynes keeping him honest.

With this sport, the emphasis is not on speed, with the prime aim to conquer the extreme terrain without touching feet on the ground or falling off. Points are lost for these “faults” and a rider with the lowest score wins.

TARGET ON THE BACK OF YOUNG WHITAKER
Scroll to top