AUGUST 15, 2011: Some of the country's leading motorcycle riders will go on trial this weekend, for crimes against the laws of gravity.

The Hawke’s Bay region will this weekend host the final two rounds – rounds nine and 10 – of the North Island Moto Trials Championships and, while there are a couple of prime suspects, the jury is still out on who will eventually lock up the titles this season.

The double-header weekend is expected to attract a bumper crop of riders with organiser Warren Laugesen also one of the favourites to dominate the elite Experts Grade section of the Nelson-Marlborough Trials Centre-sponsored competition.

Hawke’s Bay’s Laugesen is a seven-time former national champion but, because he hasn’t contested all the earlier rounds, he really has no chance of winning the North Island crown this season. Laugesen might just have to settle for winning his home event instead.

The man most likely to take away the main prize is Taranaki’s Matt Foster.

“I will just have to be content with trying to win one of the days,” said 38-year-old father-of-three Laugesen.

And even that is easier said than done, with Motueka’s Karl Clark, many times South Island Moto Trials Champion Jason Baker and young Dunedin rider Blake Fox also determined to feature in the Experts Grade.

New Zealand No.1 Whitaker has just returned home from a stint racing the junior world championships in Italy and, with his top-five finishes achieved at this ultimate level of the sport, it is unlikely that anyone will be able to match him at home.

Day one is scheduled for the Kahuranaki Station on Kahuranaki Road, near Havelock North, while day two is set for Mackenzie’s property on Dartmoor Road, Puketapu, with both venues featuring large rocky outcrops.

Balance, bravery and throttle control is the main emphasis for this unique motorcycle competition. Speed is not essential, with the prime aim instead being to conquer extreme terrain without touching feet on the ground or falling off. Points are lost for these “faults” and a rider with the lowest score wins. 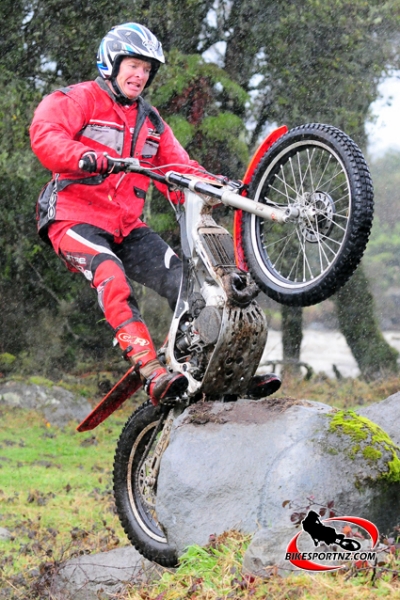